This article was originally published at promocorner.com/promojournal

Why wear someone else’s brand, when you can create your own?

What was originally meant as a prank on the local country club now approaches it’s 10th anniversary, and this logo adorns the bodies and boats of scores of my friends and neighbors (and friends of neighbors)! These shirts have been photographed such far-away places as Alaska, Hawaii, Mexico and Scotland.(Keep ’em coming!) 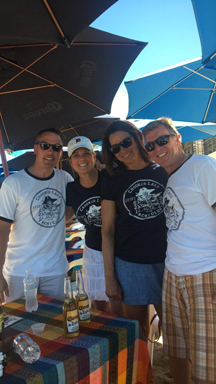 I’ve gotten to know people I otherwise might never had met, all because of one simple question:

“Where the HELL is the Crooked Lake Yacht Club?”

Easy, silly. Upon close inspection of the logo, one finds a longitude and latitude. A quick trip over to Google Earth, and viola, mystery solved. (SECRET: It’s my house)

While the Club doesn’t physically exist, I’m still the Commodore, and our community enthusiastically interacts with the brand. The Club lives in the hearts and minds of those wearing its symbol, and their positive reactions have been simultaneously gratifying and humbling to me. I take great pride in knowing I was responsible for its genesis.

As you’re building your own brand, why not incorporate more imagery into things? It’s a great opportunity to introduce some personality into your brand – for example: while I don’t actually believe myself to be a pirate, I share an affinity to certain swashbuckling and adventurous aspects of the idea of pirating – hence the presence of the pirate on a Yacht Club logo.

As the pictures demonstrate, we’ve gone to lengths to extend the brand and create more interest from our potential buyers, such as creating different versions of the logo, creating unique colorways, and sometimes introducing change-up apparel items (like ringer Ts) to create enough variety to assist in the longevity of the brand. Next year marks the tenth anniversary of the logo, and I’m often asked about the plans for anniversary product! It’s great knowing there’s pent up demand, and I’m excited to put together next year’s collection!

While I’ve become far more purposeful in my personal branding efforts as a professional, it’s a happy accident that my logo came to life. I can’t be more grateful for that set of seemingly unrelated events, and urge anyone who might listen to give something similar a try.

Roger has spent 20+ years making complex concepts more understandable for both buyers and sellers alike, and has devoted the majority of his recent career to writing and executing sales and marketing plans for early and mid-stage businesses. He is a student of organizational behavior and the disciplines successful selling organizations use to achieve the greatest reach, even in instances of scarce resources. He loves the outdoors and seeks memorable experiences whenever possible. Contact Roger at roger@branded-logistics.com or 810-986-5369.